info@leanhorses.org
How Buzz & Jewel Found Salvation
For those of us who love and care for our horses as if they were our own children, the extent of neglect and abuse that others can heap upon animals is simply unfathomable. Some people may be legitimately unstable in the mind and unable to understand the misery they are creating, as is typical in hoarding situations.

Others fall somewhere between utilitarian and downright evil, consciously choosing to disregard their abuse for whatever purpose or gain it provides them. They ignore the pain they inflict and that, as Descantes once said, “the question is not whether or not animals can talk or reason, but whether they can suffer.”

“Jewel” was a Sagebrush horse, one of 32 seized from the cesspool that was an illegal trail riding camp filled with the horrors of neglect. The time finally came when the abuse could no longer be denied and all the horses were confiscated by Animal Control and put up for adoption. Some were well-known local favorites and were snapped up quickly. The number dwindled down over the two day adoption event during the heat of August as people came to take home a new horse or two, or more. Finally, the remaining six were taken to the holding pens and a public plea made to find them homes. Three more were
adopted out, then another.

Finally there were only two… Jewel and Buzz. No more interest, no more time. 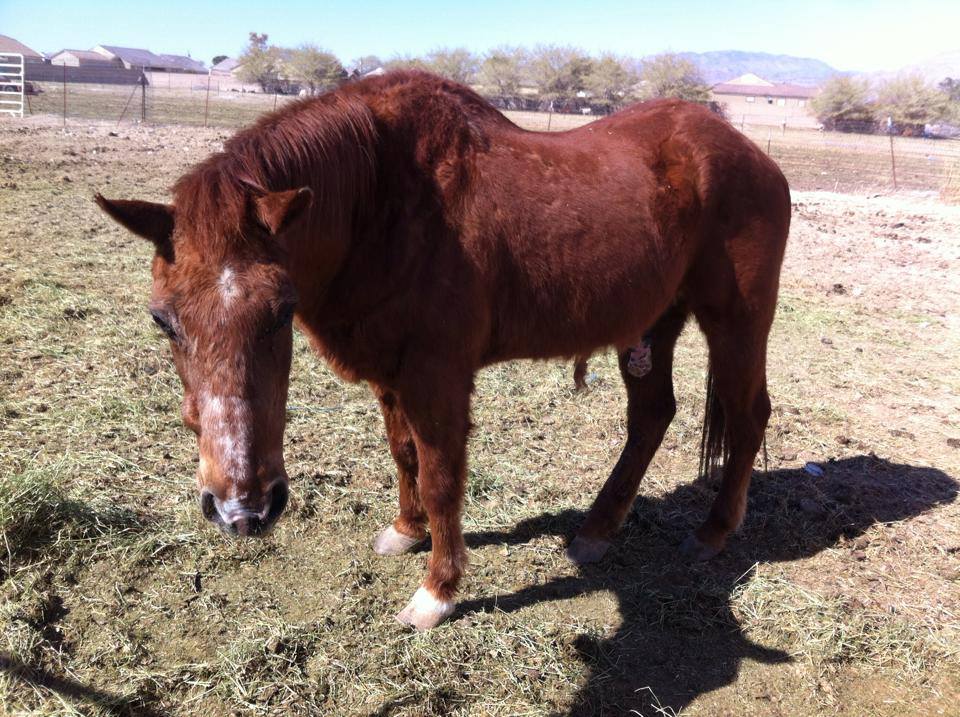 Buzz was in terrible shape when we found him

Diann Friedman and Marsha Stevens contacted L.E.A.N. for help with Buzz, a horse Marsha knew and loved, but wasn’t quite prepared to take in to her existing herd. Buzz would require an all-pellet feed due to poor dentition and a new stall to be built for him. Diann picked Buzz up to get him to Marsha’s ranch and L.E.A.N. provided a monthly feed stipend to help start his new life.
Since then, Marsha’s recovery of Buzz has been miraculous. After a year of careful and tedious care, his ghastly protracted penile condition was completely cured and he was not only back to normal, but healthy and fat to boot. 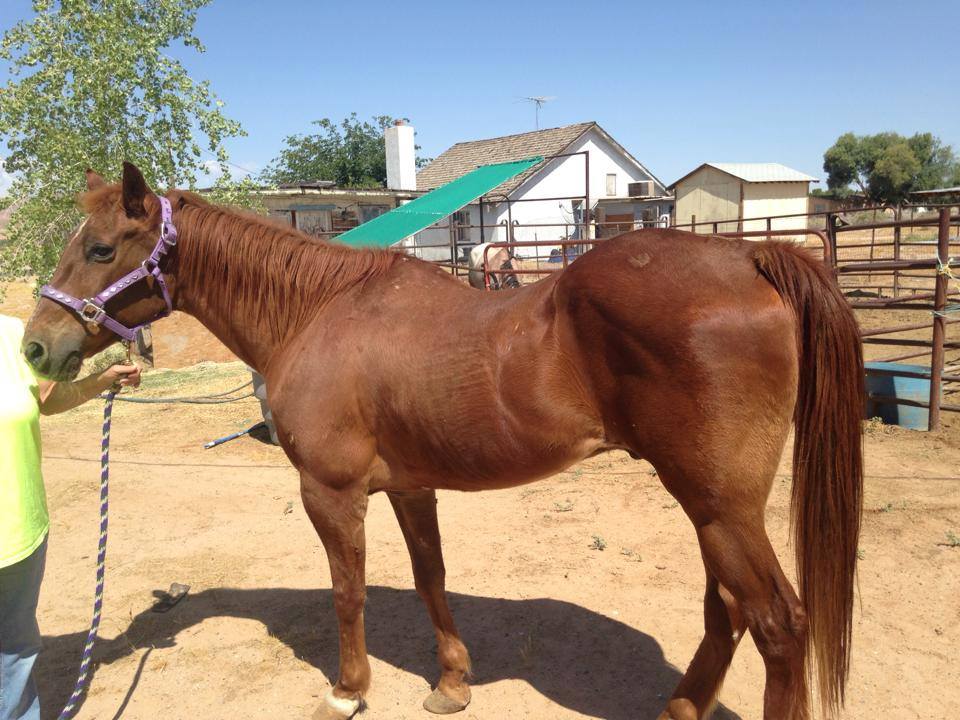 When people ask how those of us in rescue can continue to do our work, the answer is easy. Just as in anything worth doing, there must be reward – and for us, it’s the incalculable joy that comes when that bedraggled, starved, beaten, and confused horse emerges like a butterfly from their hard, ugly chrysalis.  The coat returns to soft and shiny, the eyes hint of light and personality, the ribs fade away, and the most beautiful animal stands before you. Sometimes it takes mere weeks, other times months or even years…. yet there they finally stand, transformed. 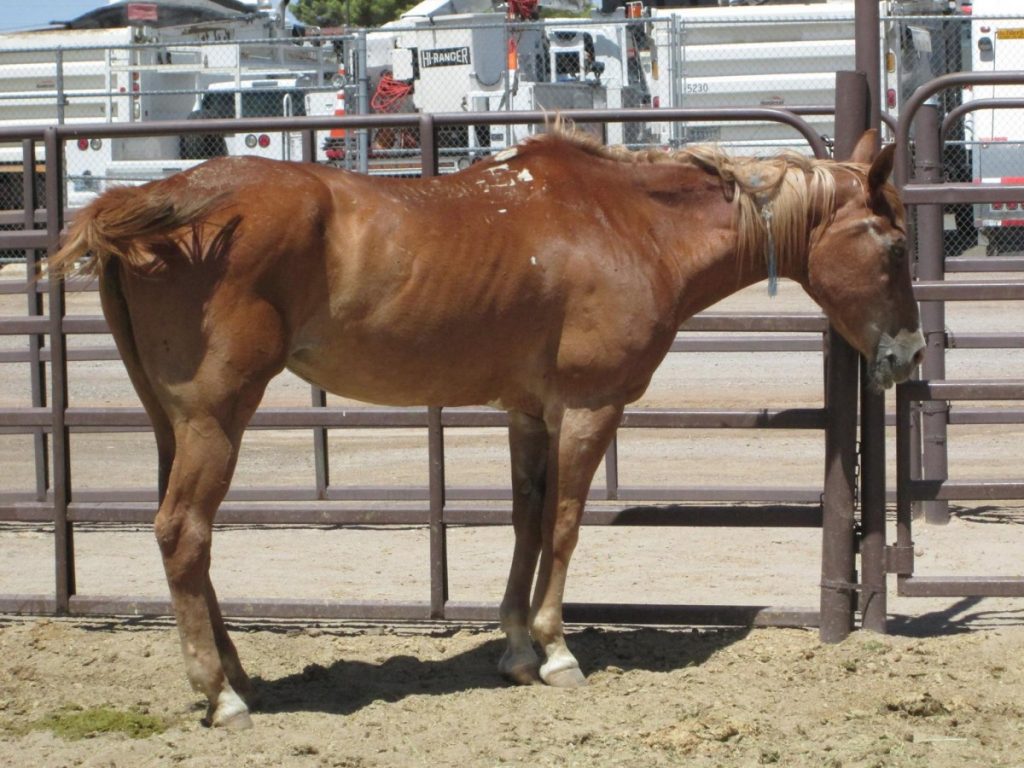 The state Jewel was in before coming to LEAN

Jewel had no one, and so this last Sagebrush horse came to L.E.A.N. to be fostered by new volunteers Scott Underwood and Ken Kulas. For nearly a year they groomed, loved, doted on, and cared for her at their gorgeous home. She became queen of their castle, roaming freely and entertaining all visitors gently with her funny ways. The cinch and saddle scars remain, but it’s obvious her heart is healed. 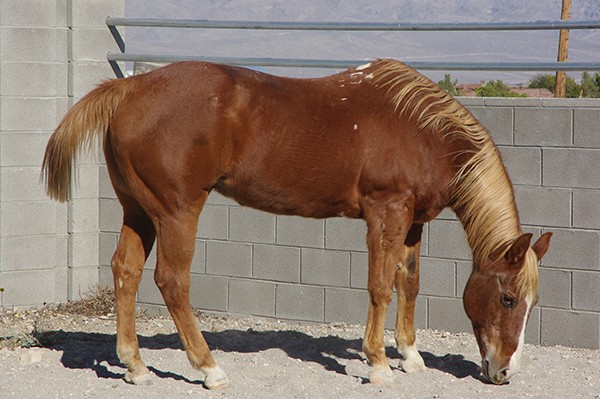 Jewel after being taken care of by LEAN

When Ken and Scott contacted L.E.A.N. to ask to adopt Jewel permanently, we were ecstatic. For Jewel and Buzz, both in their twilight years, it is the greatest of feelings to know that they will live out their remaining time in the loving embrace of their new owners. Each horse, back from their own private hell, is changed forever. We don’t know exactly how, because we’ve only known them since the end of the abuse phase. Were they once playful, silly when turned out, loved to be groomed or to swim, had a goat as a buddy, or shared their stall with the barn cat? We don’t know a thing about their memories, except that whatever once made them happy was taken from
them forever.

We can’t give them back what they’ve lost, but we can give them happy new memories….and salvation found.