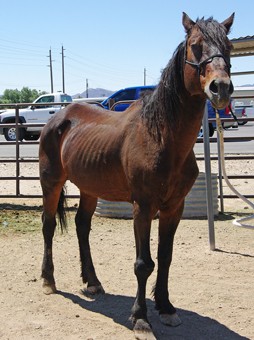 Other horses had already come and gone from the CCAC holding pens, but because LEAN needed a foster who could handle a stud, the sad horse waited, and time grew short.

From a desperate public plea for help, at last a woman with a large ranch and larger heart – Heidi from Rocking H Ranch – said she would take him in and at least get him to safety.  We jumped on the opportunity…and she took him in and named him Branch, so handsome was he.

With a fresh bath and roached mane, he was immediately transformed. Months later, a decision was made to geld Branch.  It was risky….20-something years old and not an easy operation.  But LEAN’s mission is to end the succession of unwanted horses, and adopting out an old stallion was not only irresponsible, it was improbable.

As luck would have it, a veterinarian specializing in 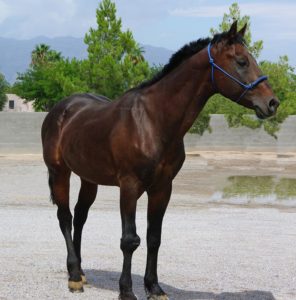 The stars aligned once again for Branch and despite having an enormous washing-machine heart murmur, he survived and recovered from the closed castration without a hitch.

New LEAN foster Fred took in this old soldier and the two bonded immediately. Branch would stay with Fred for another year….being occasionally ridden but more often being left just to relax.  He was good with kids and periodically marketed as a family horse…but the giant knee and old age frightened all potential adopters away.  Finally his companionship came in the form of another lost soul….Annie. 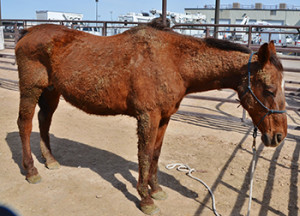 Found wandering loose in a city park, the old broodmare was caked with manure. She didn’t even try to run away when Animal Control pulled up with the trailer; in fact, she practically leapt inside. Her winter coat was a stinky, matted mess.  She stood completely hopeless, no will…no interest…nothing left to care about, and nearly starved to death in the deal.  She was loaded up and taken to Fred’s with urgency –please, take her in, help her live.

Fred erected a new stall and shader in a matter of hours, and opened his door. 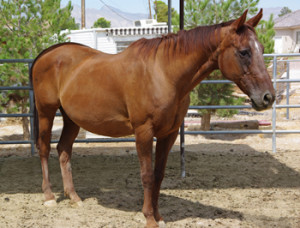 “The odd couple” they are called. More than one person has commented about them this way. Annie recovered splendidly at Fred’s, next door to Branch’s paddock. Never turned out together, they lived side by side over the fence. She too was arthritic, slack in her big broodmare belly, and unlikely to ever find an adoptive family.

Together, Annie and Branch were resigned to live out their days in neighboring paddocks. 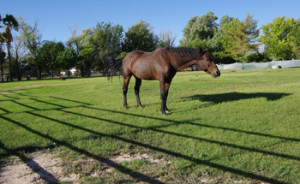 One day, a wonderful woman decided that the pasture property she managed could spare a space for LEAN’s two oldest unwanteds.

With mixed emotions, foster Fred loaded up the pair for a short drive to a secret eden amid the desert landscape.  A pasture space ten times larger than what they had ever probably enjoyed was opened before them.  Each was put into an adjoining pasture to again live together with a fence between. 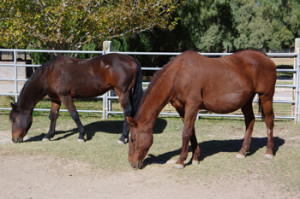 After a few weeks of separation the day came to join this couple together as final companions in life.

The panel between the pastures was removed and they moved easily to each other’s side as if it had never been any different.

Today, despite some old-age difficulties, they are the happiest of odd couples…Branch finally has a mare of his own, and Annie has a companion who asks only for her quiet company.