info@leanhorses.org
We, The Volunteers
A little over the two-year mark from the early beginnings of L.E.A.N., it’s amazing to look back at how much has already been accomplished, and the foundation that’s been laid for continued growth and success.  This organization has taken on a life of its own, expanded in new directions, and its lifeblood are the volunteers. 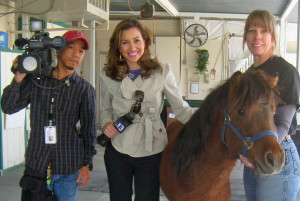 Local coverage by Ch. 13 of our first LEAN pony

When first launched, the main focus for L.E.A.N. was procuring fosters, because it was of utmost importance to have places for the holding pen horses to go immediately.  Soon, we had over a dozen horses needing feed and most required medical attention. While the first Board members and fosters were contributing personal funds to the cause, it became apparent that we needed to incorporate and become a 501c3 non-profit in order to be eligible for corporate sponsorships and grant opportunities.  By August, the first Board had been formed, by October the Federal paperwork filed, and shortly into 2013 we received our non-profit designation. 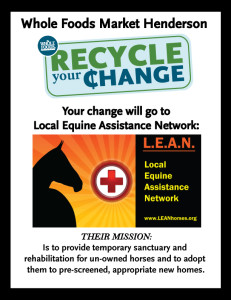 While this was happening, other events were literally unfolding.  We were invited to be the beneficiary of a charity biker run by a local promoter.  Trail riding groups were offering to hold benefit rides for L.E.A.N.  Our tack sales were becoming popular for those shopping for new items and others wishing to donate their old.  We were invited to host a concession stand at the local NASCAR track to earn proceeds from food and drink sales.

In 2013, a local wild horse advocate made L.E.A.N. a charity of choice for their annual golf tournament, introducing our mission to local car dealerships and their employees.

Whole Foods, Caesars Entertainment, the Harris Foundation, and other large sponsors took notice.  The desire to help these saddest of horses was reaching out across many different interests and industries. 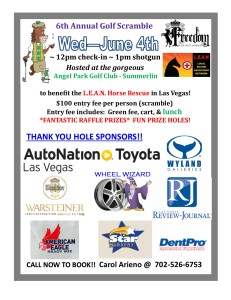 In all cases, whether providing shelter and rehabilitative love to a needy horse or helping promote and staff fundraisers, sharing our mission with friends and family, or adopting a new best friend from L.E.A.N…..our community of volunteers continues to expand, grow, and accomplish tremendous things for southern Nevada’s horses in need.  Low-cost castration clinics, educational appearances, feed assistance, shade structures, and more are programs L.E.A.N. is developing to give back to its community who so generously support our horses.

With nearly 40 horses now having reached safety or sanctuary in the last two years, everyone can be proud of being part of giving these beautiful animals a second chance at life.